BIBLE VERSE OF THE DAY: Why do the nations rage, and the people plot a vain thing? The kings of the earth set themselves, and the rulers take counsel together, against the Lord and against His Anointed, saying, “Let us break Their bonds in pieces and cast away Their cords from us.” - Psalm 2:1-3 NKJV

If you’ve ever been on a road trip with a toddler, you’ve probably experienced the struggle of trying to keep them buckled in their car seat for hours on end. They don’t understand that the restraints are keeping them safe, and that ultimately, you love them and know what is best.

So it is with mankind and their Maker.

From the beginning of creation until now, people have tried to cast off every restraint placed on them by the loving hand of God. Not willing to yield to the perfect will of the Father, nations have rejected God’s authority again and again.

Though the Lord remains faithful, He also maintains justice, and there are consequences to rejecting His authority. Here are 3 of them listed in the Bible:

1. They get what they ask for.

They soon forgot His works; they did not wait for His counsel, but lusted exceedingly in the wilderness, and tested God in the desert. And He gave them their request, but sent leanness into their soul. Psalm 106:13-15 NKJV

Nations that disregard God’s counsel in favor of their own lusts eventually get what they ask for. Sadly, though their flesh is satisfied, their soul is parched like a dry and thirsty land with no water.

Let us come to the Fountain of Living Water—to the well that never runs dry—and drink to the full of God’s goodness and mercy! (John 4:10)

Therefore, as the fire devours the stubble, and the flame consumes the chaff, so their root will be as rottenness, and their blossom will ascend like dust; because they have rejected the law of the Lord of hosts, and despised the word of the Holy One of Israel. Isaiah 5:24

The horrendous aftermath of a wildfire may be an accurate word picture of the consequences that a nation without God will suffer. Consumed by their own falsehoods, those who reject the Word of the Lord will suffer unnecessarily.

However! The Lord is faithful and just to forgive. (1 John 1:9) He longs for us to return to Him with all of our heart, mind, soul, and strength. He longs to cover us with His mighty hand and be our Protector.

Let us repent and humble our hearts before Him that He might come and heal our land! (2 Chronicles 7:14)

3. They are left to their own devices.

Of the Rock who begot you, you are unmindful, and have forgotten the God who fathered you.
And when the Lord saw it, He spurned them, because of the provocation of His sons and His daughters. And He said: ‘I will hide My face from them, I will see what their end will be, for they are a perverse generation, children in whom is no faith. Deuteronomy 32:18-20 NKJV

Rejection of the Lord’s sovereignty and provision only leads to a desolate ending. Without faith in the One who made us, we are empty, lacking, and ultimately left to our own devices.

Let us turn back to our Rock and remember our Maker. Just like the father, who was waiting at the window for the return of his prodigal son, so the Lord is waiting for us to return to Him! 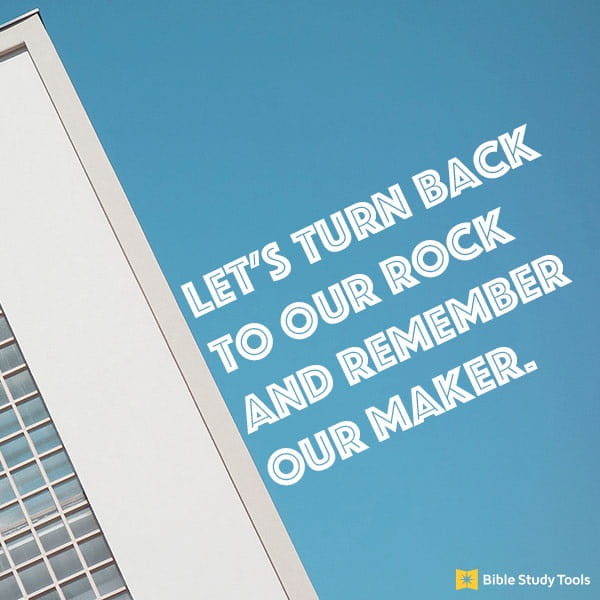 Want more Your Daily Bible Verse? We also have a podcast! This podcast features different verses than the written devotional you just read, but carries the same commitment to a closer look at Scripture each day. You can find out more by clicking the link below!

This content first appeared on Crosswalk.com and is used here with permission. To view the original visit: https://www.crosswalk.com/devotionals/your-daily-bible-verse/3-consequences-of-rejecting-god-s-authority-bible-study-minute-april-20-2018.html